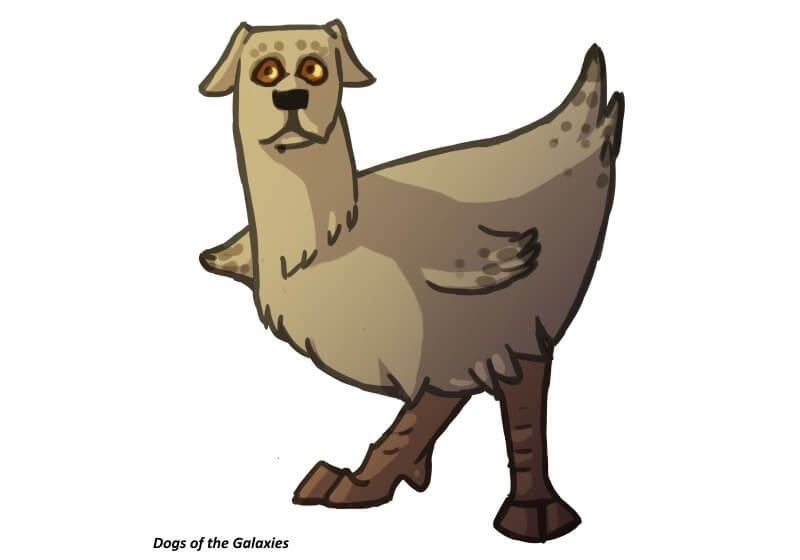 Chicken Dog has been dealing with an identity crisis lately. Born in a litter of moon dogs, she has been surrounded by barking creatures her entire life. Playing and napping, some of the main ways pups get through the day, was easy for the dog and she had no problem getting along with her fellow pups. But one day, everything changed. The pups were barking away, waiting for breakfast. Suddenly, a loud clucking sounded out above the barking dogs. What was going on? Did a chicken escape from her coop?

The dogs looked around but they saw nothing unfamiliar. Until one of the pups opened her mouth and another loud clucking emanated through the universe. Everyone looked at the pup that made the sound, unsure how to interpret what they had just heard.

Suddenly, the group busted into laughter – some huge, belly shaking, bubbling giggles. Finger pointing and howling, the dogs could not stop laughing. They had spent their entire short life together and never noticed that one of them was a chicken. Her head looked just like theirs, but that was pretty much it. This is how Chicken Dog got her name.

Chicken Dog could not handle the snorting behind her back. The constant jokes about eggs were getting old. She decided that it was enough. Maybe she was a chicken indeed, so she headed to the chicken coop. Chicken Dog clucked her way in, and tried to balance on the roost. This was an odd feeling. From the corner of the coop, the other chickens peeked at the dog. What was this creature doing here? Yes, she sounded like them, she kind of looked like them but something was weird. Protectively they sat firmly on top of their chicks.

Before long, the chickens started engaging with Chicken Dog, who was precariously balancing on the roost. The chickens nicknamed her Acro Chick, because somehow she managed to do the most interesting flips and flops and still end up on top of the roost. Chicken Dog and the chickens got along fine and became friends. Chicken Dog finally felt appreciated for who she was.

But one problem was spoiling her happiness. This meat eating hen was used to eating moon stones and little space creatures. Now she was served a diet of grains and moon dust. This quickly became a problem, as she had never been a vegetarian, nor did Chicken Dog have teeth for eating grains. The chicken diet was not compatible with her dog teeth and digestive system. Chicken Dog tried adding enzymes collected from Saturn, and special bacteria from Mars but to no avail. She had to make the tough call to leave the coop and get back to dog life.

Now that she is back with the pups, she is feeling healthy again, gobbling her diet of meat and moon stones. But her friends are in the coop, and this is where she truly belongs.