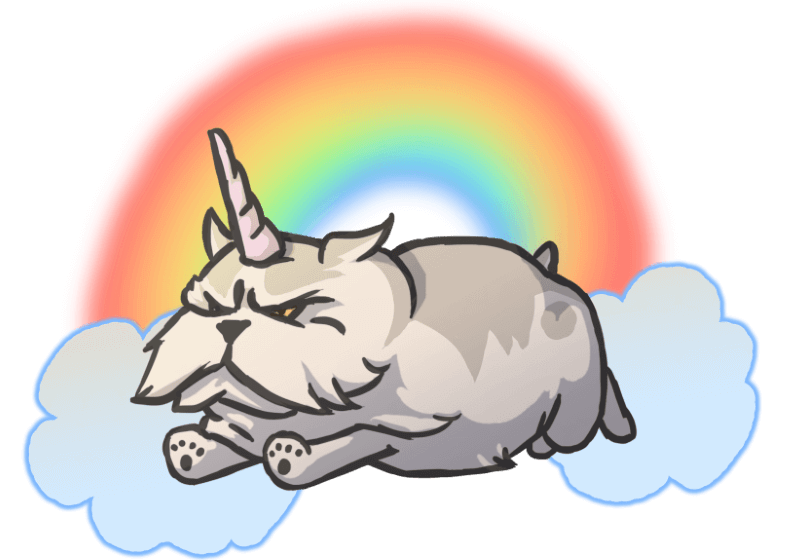 Not every dog in outer space is fast, scary or particularly strong. Some are downright cuddly. Unicorn Dog is one of them. With his fluffy fur and jolly belly, he tends to be everybody’s friend. That is at least how it was supposed to be. Unicorn Dog used to be the dog who made everybody feel better, the one to help his friends see roses and rainbows. He is supposed to be the dog handing out rose-colored glasses and party hats. Things are different now.

It started last year, when Unicorn dog was organizing his annual kite flying party. This event brings the whole community together, and even the grumpiest bullies get tamed by the party of kites and butterflies. The point of the feast is to create and fly kites that attract the little colorful insects. Space butterflies are quite large, and they reflect the light of the nearest sun, creating a sky full of little radiant lights. To say it is a happy day would not give it the credit it deserves. After all, it gets many dogs out of their astrological winter dip.

But this year Unicorn Dog was not having it. He was tired, he felt stiff and turned into the grump of the cosmos. What was going on? When he didn’t show up to the weekly ice cream social, something the Unicorn Dog himself had initiated lightyears ago, word went around that something was terribly wrong. The dogs of the galaxies decided on an intervention. This is not how they knew their friend. Unicorn Dog needed help.

Three days later they assembled right by the space station, and just when the last dog walked onto the roof, Unicorn Dog arrived. He was flabbergasted to see his buddies all together. They were waiting for him so they could cheer him up, show him the pretty rainbow overhead and hand him some rose-colored glasses.

“I have been so tired lately, I feel like I am getting old and fragile”, Unicorn Dog said to his friends.

Unicorn Dog told his buddies how he still cared so much about each and every one of them, but that he just could not do it anymore. He could not be the one pulling the happiness cart. A big sigh vibrated through the dogs of the galaxies. There was something they could do. It was time for the dogs to help their friend and they let him know it.

After that day, many dogs began to help out a lot whenever Unicorn Dog organizes events, although Unicorn Dog is still the one that does the most.

The dogs of the galaxies have stepped up and help with a lot of the hard work that Unicorn Dog used to do all on his own. They jump through the clouds to connect with butterflies; they manage the weekly socials and bring out the kites. They ask Unicorn Dog if there’s more they can do to help and seeing their genuine willingness to help touches Unicorn Dog’s heart so.

Needless to say that Unicorn Dog has left his grumpy self behind and is a happy, cuddly dog once again.