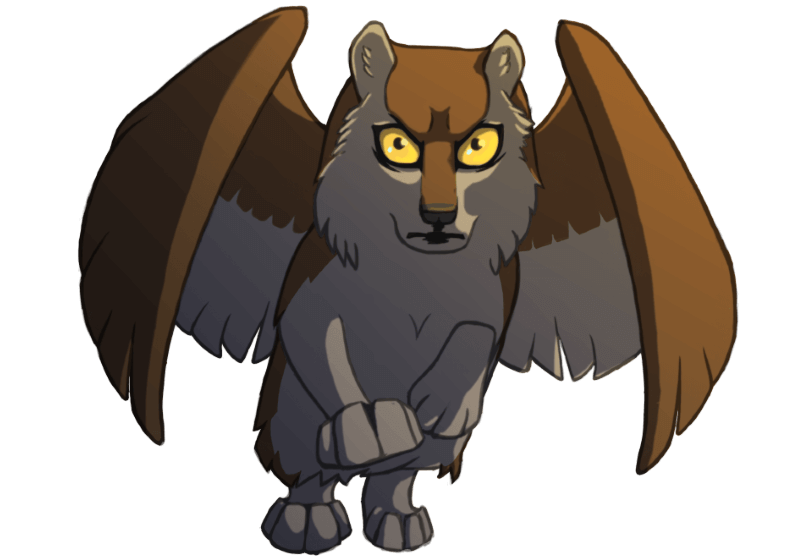 Owl Dog is on a first name basis with his family doctor. He needs help every day, ranging from a band aid to a splint and crutches. Owl Dog is a playful, and most often, prankish dog. Because his pranks are often so edgy and borderline dangerous, Owl Dog sometimes unintentionally hurts others, which makes many view him as a vicious dog.

Owl Dog needs roughhousing more than he needs food and shelter. It’s a good thing that his brother Whoooowlah is just the same, because other space dogs stay at a safe distance from both of them. Together the brothers turn and tumble through space, not only hurting themselves but damaging everything that’s in their way. They once ran into a planet, colliding with it head on. It’s safe to say that the inhabitants of that planet were not happy about that.

The same day they ran into a planet, it wasn’t long before they were at it again. But this time, a litter of space puppies got in their way.

The mom dog of those puppies knew all too well about Owl Dog and Whoooowla. In fact, she had sensed they were playing not too far from her little, cone-head-shaped puppies, so she decided to hang around to make sure none of that rough and tumble broke her babies’ bones.

She came out just in time to see the rambunctious brothers drift too dangerously close to her puppies who were practicing howling at the moon. Owl Dog and Whoooowla were only a fraction of a light-year blink away from colliding with the unsuspecting puppies.

In one fell swoop, mom dog got her brood out of the flying dogs’ way. Luckily, nobody got hurt, but mom dog was hopping mad and that in itself wasn’t a safe thing, as most space creatures hid when mom dog was angry. Mom dog’s anger was usually scarier than an erupting space volcano.

Mom dog bared her teeth, raised both eyebrows and leaped into the space void, grabbing Owl Dog by his massive ears, which made Owl Dog yelp in pain and come to an instant halt, losing sight of his Whoooowla. The ruckus caused by mom dog’s intervention could be heard three galaxies away.

With the large female dog standing over him, Owl Dog was suddenly not so tough and dangerous anymore. In fact, he looked a little humble now. Soon, his Whoooowla appeared by his side again and they both told mom dog they didn’t mean her puppies any harm. All they just wanted was to play.

Mom dog wasn’t having it. She wasn’t going to let them get away with it. She told them that the only way she’d let them off was if they did a good deed, like babysitting her pups for an entire day, making sure none of them got in trouble.

Sure! Exclaimed Owl Dog and Whoooowlah in unison. That seemed easy enough. They were already transmitting each other telepathic messages thinking how fun it would be playing with young puppies.

Owl Dog and Whoooowla tried to teach the puppies to fly, but their bodies were so out of proportion that flying just didn’t seem an option for the little ones. This was probably a good thing, otherwise there would for sure have been a trip to the emergency room.

Owl Dog used his acrobatic qualities to entertain the pups though, and they had a blast. Honestly, this show had half the galaxy watching and cringing. Luckily there was not too much damage. Sometimes when Owl Dog really got at it, entire solar systems could be knocked off course. And although the puppies were quite large, definitely bigger than Owl Dog and Whoooowla, the brothers managed to keep the pups in line the whole day. Soon it was end of the measured time and mom dog let them go, but only after extracting promises from them that they’d be of good behavior going forward.

However, Owl Dog and his Whoooowla didn’t stay on their best behavior for long. After all, there was fun to be had and fights to be fought. It won’t be long before they show up somewhere with a sprained wing or a bloody nose.

It helps to be on first name basis with the family doctor.