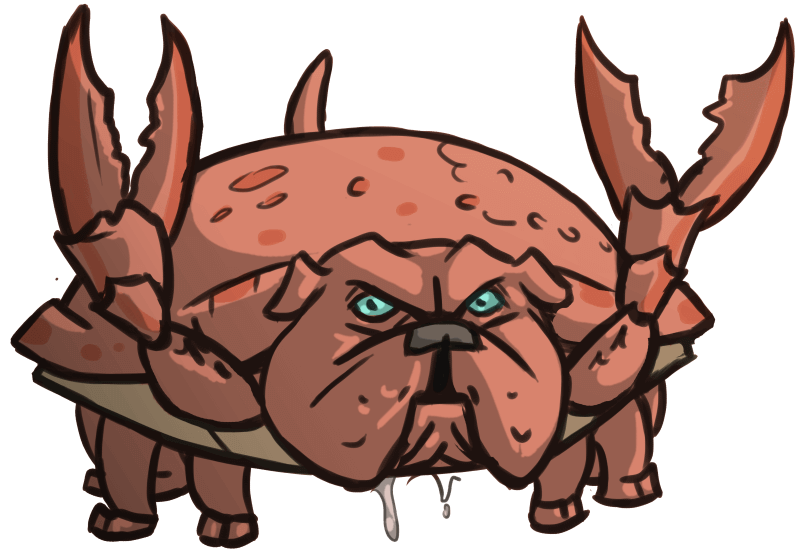 Crab Dog is scared of mice. Not just a little bit scared, he is terrified.

He would rather run through an exploding super nova star, than be anywhere in the vicinity of a tiny space rodent. Crab Dog is a giant compared to a mouse.

Why is he so afraid? Do cosmic mice give him the heebie jeebies because they are so unpredictable? Is he afraid that one will feast on his paws in the middle of the night?

No, this dog does not believe a mouse will eat him. Quite the opposite. He has a mouse trauma because of how a large, heavy dog with humongous paws and a tiny rodent just do not seem to match.
When Crab Dog had barely outgrown puppyhood, quite large in size yet still incredibly clumsy, he made friends with a little space mouse. The dog admired how this little cosmic animal could fly, and the mouse appreciated how Crab Dog could quickly gather loads of crumbs and seeds, which he then gave to his little friend. It saved the mouse a lot of time and effort, so the two had time to hang out and play together.

One morning disaster struck. The friends had played all night. In the morning when one of the area moons was rising, the giant dog looked around for his buddy in order to give him breakfast. Cosmic mouse was nowhere to be found. Eventually Crab Dog gave up and nestled back into his shell, hiding away from flying space dust. Then he felt a tiny lump under his left leg. He had almost trampled the little mouse with one of his large, strong paws. Mouse did survive this whole adventure, but Crab Dog was scarred for life. He had hurt his little friend. What a disaster it would have been if Mouse was mistakenly killed.

This large, gentle dog, with the tiniest of hearts shed many tears. So many tears that it caused rain storms in most of the solar systems in the region. He realized that he needed to make friends with his own kind, play with the big dogs whom he could not easily trample.

Now Crab Dog does everything he can to prevent mice from getting close to him. His bed may be comfy, also for cosmic mice, but now there is a tiny rodent-deterring fence around it, and several signs that indicate that it is not a mouse friendly place.

The friendly giant gets a little lonely and sad, but at least he cannot hurt his friends. He still uses his pinchers to pick up seeds and crumbs, but then he piles up the food and disappears. From a safe distance he watches as cosmic micro mice have a party and fill their bellies.

To be honest, it’s not that Crab Dog is all-peaceful every time. Sometimes he gets into a fight and uses his pincers to good effect. They are pretty strong and can cut through anything. You don’t want to have him pinch you. But the one thing you can say about him is that he fights troublemakers his own size. Sometimes he is even the troublemaker himself.