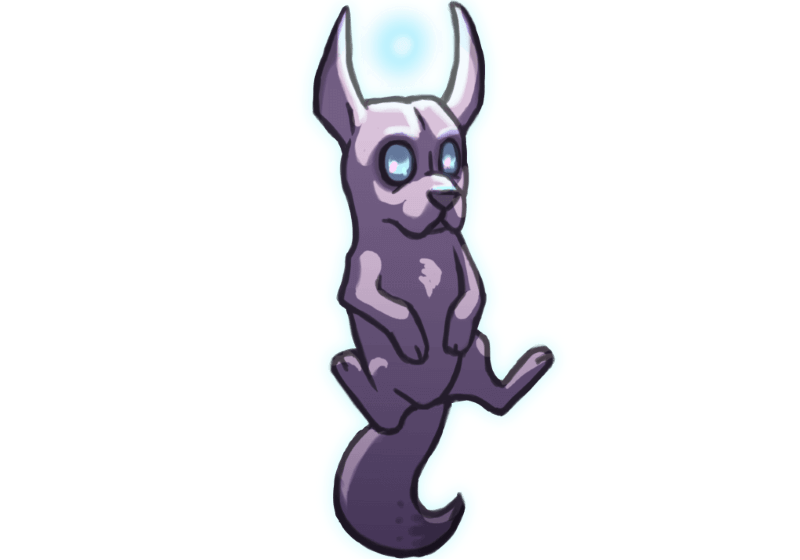 If you have the pleasure to meet the Arcane Dog, be prepared to be surprised and maybe even shocked. Many find themselves flustered by this mysterious dog’s magical powers. Be his friend, and you will benefit from his skills. Make him your enemy and who knows what will happen.

The Arcane Dog has not always been aware of his own powers. At first he thought that he was completely average, that every dog could do the same things he could. Sure, the Arcane Dog was particularly good at certain games. Not only could nobody ever find him during hide and seek, he was also always the one who instantly found his buddies. In retrospect, this is not so surprising, now that we are aware of his special talents. But being able to become invisible as well as looking through everything in order to see different cosmic layers, has turned out to be the least of his abilities.

This dog is able to see into the future. Even better, once he sees what is coming up, he is able to change it. Sometimes that works out great for the dogs around him, but if you’ve ended up on his bad side, you may not be too lucky. Not only have dogs walked around with a cloud of space rain above their heads for months at a time, the story goes that Arcane Dog likes making his foes move as if they are going through molasses. No need to go into detail about how exhausting that can be. But do not fear the dog if you treat him right. Arcane Dog will try to keep you out of trouble, and make your life smooth sailing.

What is his secret? Where do these obscure powers come from? Nobody knows for sure. We think it has to do with the Arcane Dog’s genetic makeup. The anecdotes that are still regularly told of his grandfather are legendary. He would make planets disappear, only to then make them resurface three days later on the other side of the Milky Way. But while his granddad only used his talent to confuse people and just play around, the Arcane Dog takes it a bit more seriously.

Last month, when a giant asteroid was on its way to planet earth, dogs from all over the universe made their way to the Arcane Dog, begging him for help. Nobody liked the thought of losing Earth. The people there were far too entertaining to let this majorly damaging event happen. Would the Arcane Dog be up to the challenge and change the future of the planet? Never before had he used his super powers on such a large scale. Never had he been responsible for such a serious problem. It took him several hours to expand his aura to get the asteroid within reach. Then he channeled his internal energy and changed the course of the planetoid. What a relief.

If you feel a special energy in the air, look up. You might just get a glimpse of Arcane Dog.