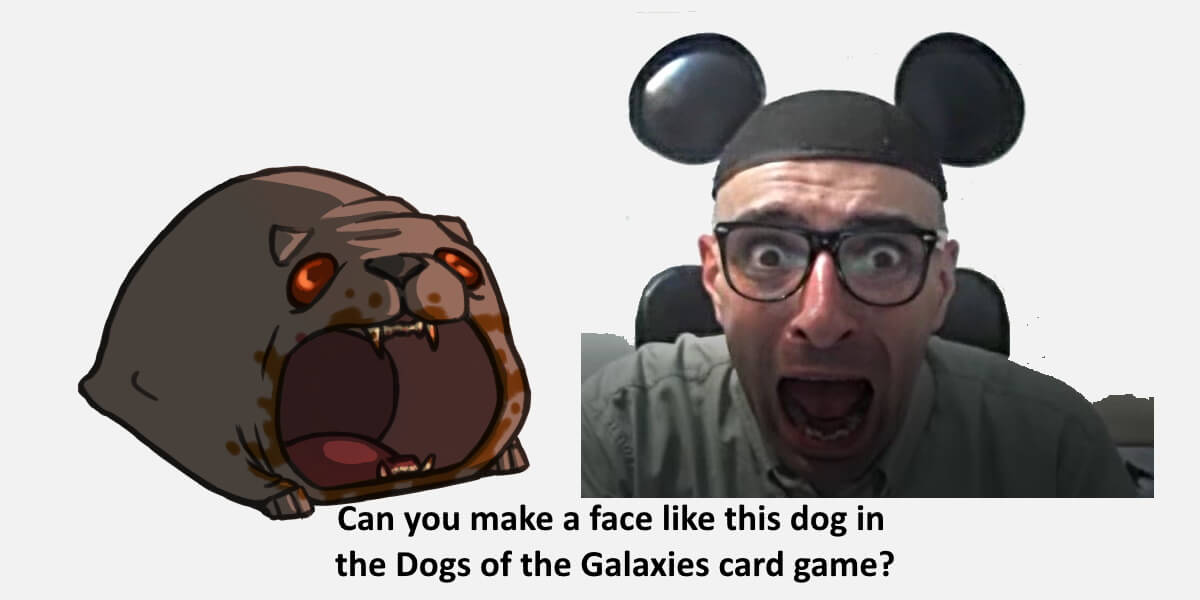 Part of playing Dogs of the Galaxies card game is that when players describe a dog, for example, when they say what they think a dog just got doing, or what trick it has up its sleeves, or what the dog likes to do,  they must also make a face to imitate the facial expression of the dog they just described (except if your group chooses to change the rules to exclude making faces) .

Get ready then to entertain and be entertained as you and your friends contort your faces to come up with all kinds of facial expressions, from the absolutely weird to the stupendously comical.

Face-making makes the game fun and multidimensional because when you caption or meme or name the dogs, you may inadvertently be captioning or memeing or naming faces made by your friends, which adds to the overall Fun!

Even with identical twins, there’s still a mighty chance that they will make faces in different ways, and look a bit different, when describing the dogs.

Some cards in Dogs of the Galaxies require that, in addition to captioning, memeing or naming the dogs, you also come up with the sounds the dogs make. Nothing could be more entertaining that watching and listening to your friends hooting like owls, mooing like cows or braying like donkeys in a bid to win points for the round.

The game play is multidimensional

Regardless of how many times the Dogs of the Galaxies card game is played and who you play with, everyone has a different way of describing these out-of-this-world-look dogs; for example, what they think the dogs just did or what tricks they have up their sleeves.
Since there are a gazillion ways people can describe the dogs, based on what they feel or think, players will come up with different and interesting weird captions, memes or names for the dogs based on the different descriptions. This keeps Dogs of the Galaxies multidimensional, interesting and fun.

You will enjoy the art work that comes with Dogs of the Galaxies. There are 100 card, with 95 dog illustrations, all of them unique. We went to great pain to make sure this comes out to be collector-card quality and we are extremely proud of the work done by our committed artists. We also included 5 imaginary cards because we know how people love to be creative. This way, they can make up and describe outer-space dogs all their own.

Can be played by both adults and kids

Dogs of the Galaxies is a family friendly card game for both kids and adults. Anyone 7 and up can enjoy this game. It’s a card game for family game nights, parties and other social events.

You don’t have to worry about language, hide in the basement to avoid the kids or quickly shut up or shut down when the “wrong” people suddenly show up.

You don’t have to rinse your foul mouth with soap and water when Grandma Becky saunters in unannounced.

Challenges players to be both creative and original 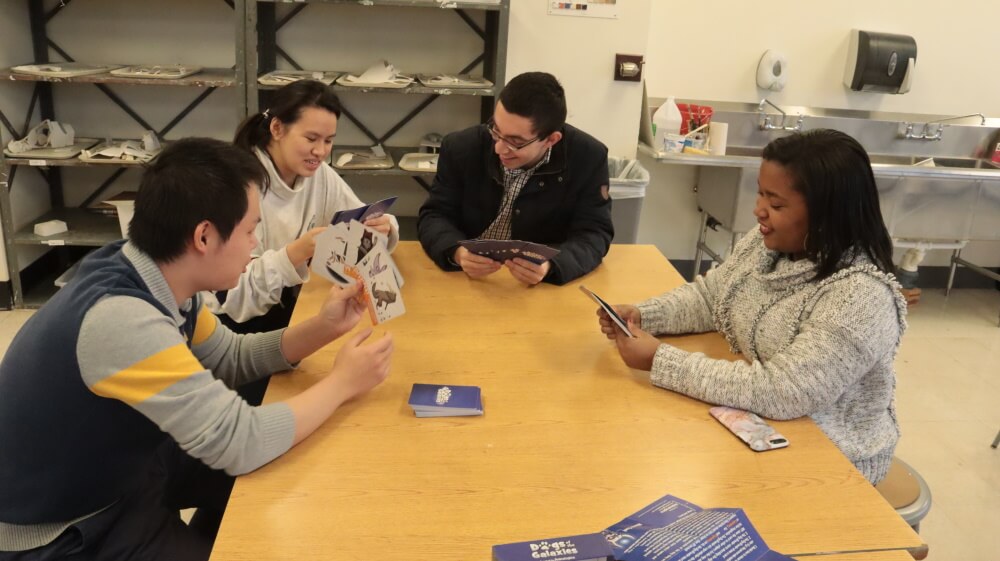 Everyone playing Dogs of the Galaxies has to come up something creative all on their own. When it’s your turn to be the Breed Master describing a dog, you get to be creative when saying what you think a dog just finished doing, or what you believe it has up its sleeves. Since you are allowed to embellish stuff, you can basically make up stories using your imagination. The description you create is the raw material used by other players to caption, meme or name the dog in the weirdest way they deem fit.

And you are also being super-creative when competing to outdo other players and win points by coming up with the weirdest names, captions or memes for dogs described.

So everyone gets to be creative, original and fun.

Want to count on luck to win a Dogs of the Galaxies game? Don’t even try? This is because every point you win on your road to winning the game is hard worn. When competing to win points, you have no choice but work on outdoing other players by putting your best name, or meme or caption forward so as to impress the breed master who is the judge of that round and win the point of the round for yourself.

This takes away reliance on luck. Every point you get is truly earned and not stolen by chance.

Liven up parties and events

Got a party or event going on and a bunch of curmudgeons hanging on in their little silos trying to act cool and unfriendly? Don’t let killjoys poop on your party. Dogs of the Galaxies is the perfect medicine that will heal such wounds. Throw in a dose of a Dogs of the Galaxies game and draw out party poopers from the corners. Soon, everyone is laughing and taking part in contributing to the common good, which is to inject oxygen into your gathering.

Be it a baby shower, a party with friends, a corporate event, or any other type of gathering, we guarantee that Dogs of the Galaxies will liven up things and have everyone cracking up.

And talk about hilarious

Wouldn’t it be fun to someone make a crazy face or moo like a cow in order to win a point? Your group will have a hilarious time as players come up with the zaniest of names or captions or make faces that make them look like a gnome or goblin, which they think looks like a dog they just described. Feel free to caption their faces because they may not spare when it’s their turn to caption yours.

An educational quality lurking underneath

Besides having fun playing it, Dogs of the Galaxies has an educational value attached. This was found out during testing. Dogs of the Galaxies also works as a tool for helping people learn how to be creative and communicate ideas. This could actually work well in classroom educational settings during which students can come up with creative stories about each dog, similar to the stories we have about the dogs.

With 95 unique dog illustrations and 5 imaginary dog cards, there’s more than enough raw material to use in fostering imagination and creativity.

We highly encourage schools to give this a try. We believe they will find it exponentially beneficial to students in English, literary or creativity classes.